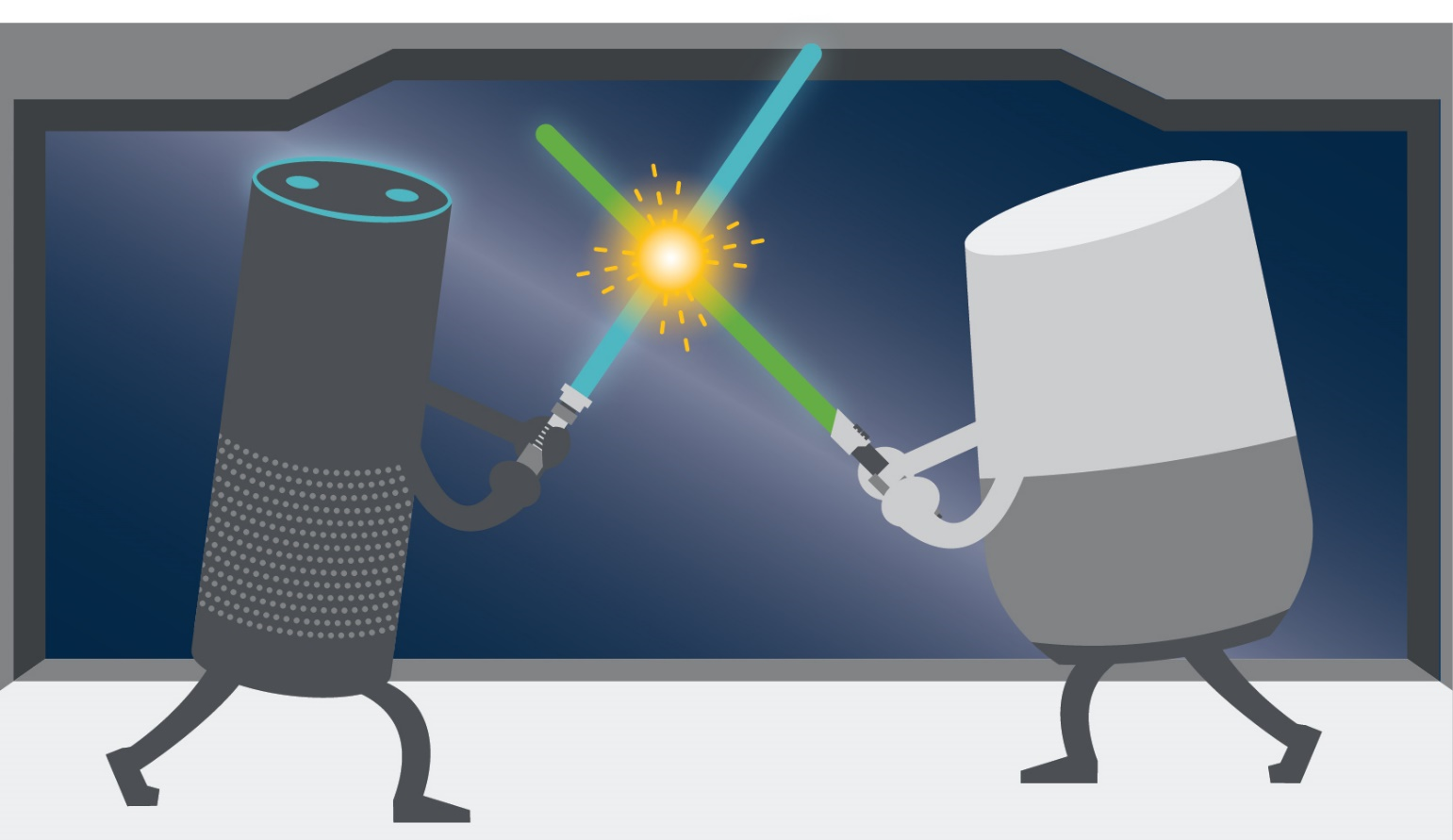 Welcome to smart home hell everyone. It is now 2019 and we have so many choices when it comes to integrating technology in our home. From lights, outlets, garage doors, entry doors. Everything can pretty much now be automated. We all love AI assistants, but which AI assistant should you have in your home. Basically it boils down to two real competitors, either Google Assistant or Alexa. Oh but Chris what about the Homepod and Siri? Please, they are not even in the same league as these two. My mother got one for free from the casino and it took her a year to hook it up ( I still don’t think she uses it). That thing couldn’t even play songs from Spotify, only Apple Music. Pretty much the Homepod is a glorified speaker and until Siri gets in line with the two major players, it will die a slow death.

If your a dad not in tune with technology then this part is for you. Amazon created “Alexa” and Google has their Assistant. We all know how much Google has taken over our way we get content and information. Its on our laptops, tablets and phones. If you didn’t know, Amazon came out with Alexa back in 2014. It wasn’t until 2016 did Google bring its Assistant out to the masses. So right there, Amazon had a 2 year jump on the market of AI assistants. In this form came the Echo. A cylinder like device that has microphones and a loud speaker. Its main focus has always been to constantly listen to certain commands, mainly its hot word “Alexa” and then understanding what its user is asking. Amazon uses what they call “skills”. These skills have grown substantly over the last 5 years. From simple things like setting alarms, reminders and telling you the weather and traffic to instructing you how to make drinks, check your front door via Nest or Ring to reading your kid a story. To this day, there are 1000’s of skills available. Amazon even went as far as having its users the ability to create their own skills called “BluePrints”. Essentially the sky is the limit with Alexa, and I love it.

Fast forward 2 years, and in comes Google with its “Assistant”. Google came in with a different approach. It not only wanted to give you the power of their search engine in the palm of your hands, it wanted to be your digital assistant. Whether that was updating your calendar, setting alarms and reminders to giving you vital every wellness information such as weather, stocks, messages and more. What Google did was take what Amazon did 2 years prior and improve how its user get the information. Google Assistant debut in 2016 across the Pixel and Pixel line, Google home and Google’s messaging service “Allo”. In 2017, it started deploying it to other android devices making it accessible to more people and by the end of that year, over 400 million devices were activated that now had Google Assistant.

To this day, I think the Google Assistant is a great software feature that’s on its mobile and home devices. Unfortunately, I think Google Assistant shines best on its mobile devices rather then in the home with their minis and home speakers. Not that its a terrible device and I know people who have them love them, Its just I haven’t really used it as much as I probably should and the Echo just works. I would totally use Google Assistant on my phone if my phone was an android where its baked in. Currently I use iOS and barely use Siri and opening up the iOS app for Google Assistant just defeats the purpose. In my dreams I wish I could make my phone chose my preferred AI. I have the Alexa app downloaded as well but that’s just to drop in on my Echo Spot and update its settings and skills.

That brings me to the next part of this battle. Amazon has Alexa in more home products then Google. When Amazon debut the Echo Speaker, they had one device. Now it has several including the echo dot, echo spot, echo show, echo input, echo wall clock, echo look and now echo auto. All these devices are baked with Amazon’s Alexa, so no matter what device you choose, you will always have “Alexa” to help you.

Google currently has these devices made for its assistant currently on the market ( no I will not count the Nest products). It looks like Amazon has more choices for the general population.

Currently I have the Echo Spot. I got it for Christmas when it was on sale for 99. It still sits at about $129 brand new. Whats nice about the Echo Spot is that it has a video camera on it so you can video chat with other people who have the Echo Spot or even through the Alexa App. Another feature I like is “drop in”. It was on my Echo Dot but only audio of course. What this does is act like an intercom where you can two way, and with the Echo Spot, or Echo Show, you would be able to see them. Sometimes I will drop in before announcing I am going to see if my older kids are behaving (Yep, I’m that dad). Its a good visual tool because it does offer useful information like time, appointments at a glance, weather, sports scores and a few others. Since it has Alexa built it, you can pretty much control and operate any one of its one thousand useful skills.

In conclusion, if your in the market for an Alexa device and need video, this is def the one I would start with. Its compact and affordable and gives you everything you would want in an Alexa device. For those music buffs, yes it has an 3.5 mm audio jack to hook up some external speakers if you wish. You can get these devices pretty much anywhere but why shop anywhere but Amazon. Click the picture below and get yourself one of these bad boys.

Review. Is it something you need?

PowerSchool is the devil!

5 Tips on How to Take Back Your Bedtime